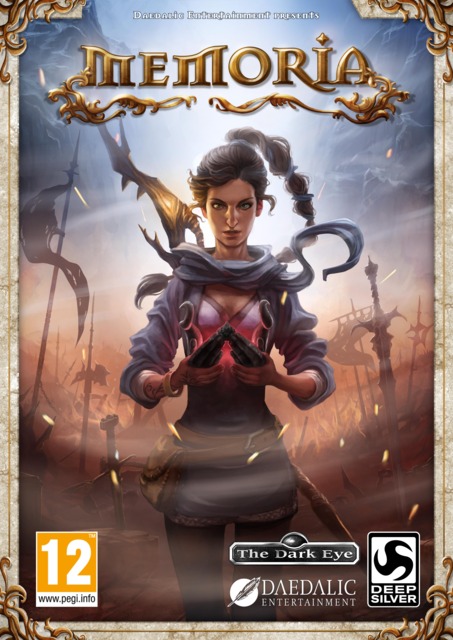 Finished Memora. This is a sequel to the Chains of Satinav.

Memoria tells two concurrent tales placed within the mythology and history of the world of The Dark Eye. As Geron you want to find a way to lift the spell from you faerie Nuri which has turned into a raven at the end of the last adventure. As such you encounter a gypsie which could help you out… if you help him out solving a riddle. Time is running short since Nuri seems to forget her origins and becomes more and more “raven” by time.

On the other side you play Sadja, a princess 450 years before. She is on the way to find a magic mask, of which is said it could decide the faith and outcoming of any battle.

As both plots overlap from time to time, you switch between Geron and Sadja. As Geron is reluctant and shy, Sadja is cheeky and defiant. Geron’s world is colorful and bright whereas Sadja’s world is dark with a looming total destruction by hordes of daemons due to mage wars.

The connection between both story lines is not obvious but develops from chapter to chapter. And soon you discover that Sadja is not the “princess” at all. At the end you face again, as in the Chains of Satinav, a bittersweet love story.

The riddles are fair, sometimes a bit trial and error. The environment is beautiful drawn and one can see that the developers really had a caring hand when crafting the scenery along with the dialogues and audio and lots of details and charm. The interface is beyond any doubt.