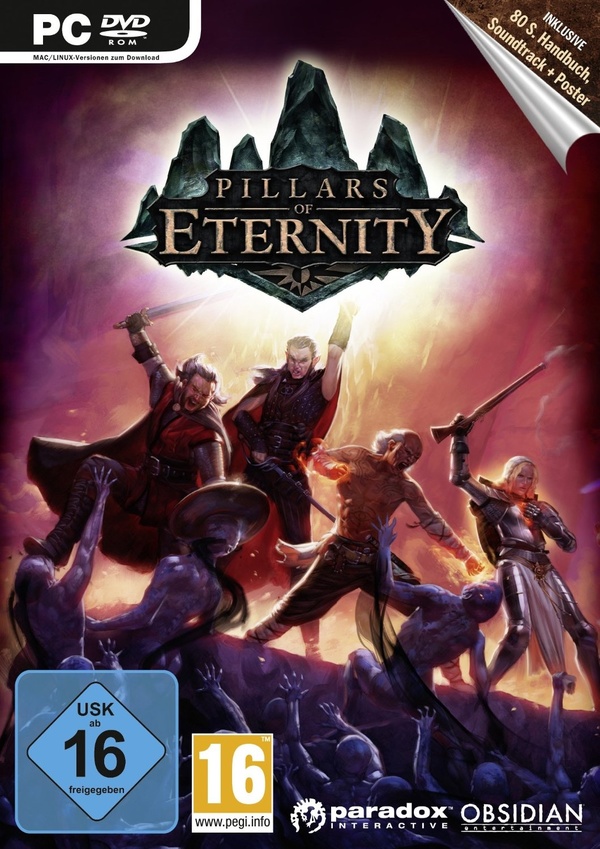 Finished Pillars of Eternity. All played on Kubuntu Linux.

Pillars of Eternity is are a very nice remembrance of one of the golden ages of RPG: it’s a Baldur’s Gate arrived in the modern days.

You play a “Watcher”: someone who is capable to look into one soul and see memories of this particular person. This knack let you know if someone is telling the truth or lies to you. On a new world called Eora, you strife the landscape of Drywood. Here chances are, that babies are “Halloborn”, without a soul. The locals are desperate and taken quite fanatic actions, e.g. killing advocates of the so-called animancer. You are to investigate this phenomenon and as it turns out will confront the history of this place, the gods, and a lot of opponents in the path.

The whole story is narrated textual. There is a ton to read and shows how much the developers of the game lay their heart in it. The landscape is a beautiful design and the combat is fun and one major plus-point of the game.

Though the story got confusing from time to time and characters are seldom rememberable. Also, I can’t help to repeat “less is often more”. There are tons of buffs and spells with little variance as it seems to me. There are three things, which annoyed me most: the artificial restriction to only camp a limited number of times by having a maximum of 4 “campfire supplies” (for whatever this is) is stupid (if I consumed more, I have to return to some settlement to buy new one. What a waste of time!), the loading takes “ages”, and the difficulties of dragons. For the last, I got my party up to level 16 and still could not face the Adra dragon or the alpine dragon. Everyone else was a piece of cake. So I let all dragons (but the Skydragon).

And beside some bugs (once I had a full crash) the game runs smoothly on my Kubuntu Linux.

A feast for friends of old RPG with some minor quirks.