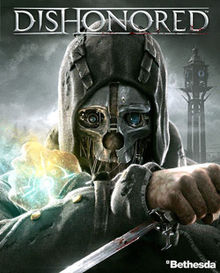 Nice game! You play Corvo Attano, the Lord Protector, whose agency is to protect the Empress and her daughter in a steampunk version of London called Dunwall. You are tricked, brought to the prison and should be executed as the scapegoat for the murder of the Empress. You manage to escape and then you go for a vengeance rampage.

This game is basically a stealth game with some mysterious magic powers given to you in a comic styled but somehow dystopian steampunk world. The story is well written, the world is nicely done, the graphics are done fine with an Unreal engine underneath.

I finished the game twice:
* playing with Low Chaos, meaning killing no-one or at least very few. I failed the “Clean Hand” achievement by merely 4 kills.
* playing with High Chaos (at the highest difficulty). This was way easier than the Low Chaos walkthrough on normal difficulty, … but a massacre. I draw a gory, bloody line across Dunwall and was unstoppable.